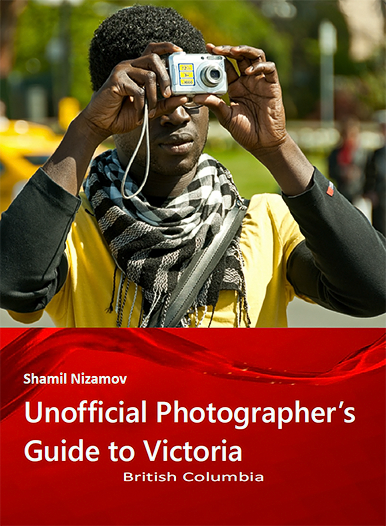 Unofficial Photographer's Guide to Victoria BC

Number of photos: about 100

By clicking this button you agree with the Terms of Services.

On the PayPal page click "Return to iSARP" to complete the purchase.

Victoria, the capital of British Columbia, is well known for its pictures of The Empress Hotel, BC Legislature aka The Parliament Buildings and some surroundings like The Butchart Gardens. At the same time there are more than 300 buildings built in 19th century which have already received a heritage designation, and more to come. It may take an entire day to locate them and to find a better place and time to shoot, or a photographer might not find them at all. If you are not a local, you may not have the luxury of dedicating this much time looking for best locations during your Victoria (photography) trips.

This book aims to guide you to a series of Victoria locations that contribute to it's photogenic and heritage characters making Victoria one of the major tourism destinations in British Columbia.

One of the Victoria's best known locations for photography is, no doubt, the area around The Legislative Assembly of British Columbia Canada Parliament Buildings (aka The Parliament Buildings) and The Empress Hotel. Between this boundaries are BC Museum, totems, Inner Harbour. We'll take a look at some part of the Victoria's Old Town with the goal of giving the readers the kind of photographer's guide or photographer's tour to capture great photos.

The author of this book is available as a freelance photographer and image editor in Victoria and Vancouver Island region.

Although the main focus lies on urban, landscape, architecture and documentary photography, I'm available for other types of projects.

Please feel free to contact by email given below.